Let’s tell a (the) story

It all began in 2002 during an unforgettable journey to the Moroccan desert where we met Lina. Returning to Portugal we stayed in touch with Lina (an e-mail here, a call there) and got together once again in 2005.
It was then we met António Fael (who Lina in the meantime had married) and through them we learned of a place called Casal de S. Simão where António had rebuilt a house a few years before.

We visited “Casal” in early autumn and despite the heavy rain, the huge ditch in the middle of the single street and the mud which was everywhere – we were taken with the charms of the village.
We knew immediately that we wanted to have a home in that beautiful place but an investigation showed that there was none available. We visited other villages but only Casal truly enchanted us. In early 2006, a house came up for sale. It was only masonry and not stone on the outside as was traditional for the village – it was a green shuttered house which was really not pretty at all.
After considerable negotiation, in October of that year we bought the house that belonged to Ms Almerinda and Mr Manuel.
Until our finances had time to recover from the purchase we kept the house as it was – uninhabitable – and in the meanwhile we contemplated its reconstruction. Suddenly we saw the potential of the house, even old, not comfortable at all, with black walls of fat, without any temperature or sound insulation and no balcony to the valley: and if the house turned inhabitable after some arrangements? Although there was little to guide us from the original rough trappings and design of the house and so much work to do, with great imagination, a strong will and a big help from our friends we set to work to rehabilitate the place.

After painting and repainting, some new electrical installations, completely new plumbing, adding furniture and some refinements of comfort such as a towel heater and new lights for the kitchen, the house started to become what we wanted it to be.

We are very grateful to Fael and João for the plumbing, Jó Bento for the wiring, Rosa for the suggestion and for helping with the yellow painting and finally to Lina, for without her, we would not have known of Casal de S. Simão. In early 2007 we concluded that to have our real dream come true we had to redo the house from scratch; to take down the entire house and build anew. We pondered, made drawings, pondered some more and made even more drawings until Easter Sunday, 2007 when we made contact with the architects Célia and Pedro and the final design took shape. All the while, Gi was planning the landscape.
Through difficult and challenging times with lots of applications for authorizations, licenses, paperwork and more paperwork, finally, in early 2008 everything was approved. We solicited quotes for building the new house (and also for the demolition of the old house) and … went into shock at the results … it was a lot of money! 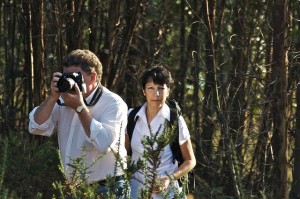 For yet another year the ‘rehabilitated’ original house fulfilled its mission. It provided for great weekends and some holiday visits. It received our friends and family (some even came from Holland, Canada and Brazil) and it served as a haven for magnificent walking and car tours. Throughout this period we were saving our Euros and dreaming of the new home and imagining refinements to the finest and last detail.

In May 2009, construction finally began and was not concluded until August 2010. Unlike so many construction projects, ours was a pleasant experience and things proceeded smoothly and in harmony between us and Mr. Eduardo (the builder) and Mr. Mário (the manager) all the while the project overseen by the architects Célia and Pedro. We visited often to see it grow and develop and paid attention to every detail (sometimes making two trips a week from Sintra to Casal de S. Simão). Jó and Rosa gave us shelter on these visits and Alice and Alberto provided space in their basement to house our “stuff.” Although a long and sometimes stressful and agonizing ‘journey’ from start to finish it all was worth it. We are very proud of the “Casa Amarela” and justifiably so if the reaction and praise from all who see it is taken into account.

We offer a special thank you to our kids, Gi and Flip who were always there with their support, providing inspiration (and some perspiration) and to Nana who loves the village and was always available to travel with us during construction and help with all that was needed.
Finally, let us explain how “Casa Amarela” got its name. During the phase of the initial challenge of making the old house livable we chose to paint inner walls a bright yellow to brighten the dark and dingy quarters and to disguise the years of wear and tear.
In addition, in the last phases of construction a yellow wall remained standing as a reminder of what was and as a further incentive for the name a bright yellow electrical plug presented itself loudly as we contemplated a name.

In the final stages of construction, not by design or choice, but by a twist of fate the house was sided with a bright yellow layer of insulation. Many of our neighbours worried that this was to be the final colour of the house and in a way it was … but in name only … the Casa Amarela! The collage of photographs hanging behind the door documents the whole story and proves that the house is aptly and appropriately named.